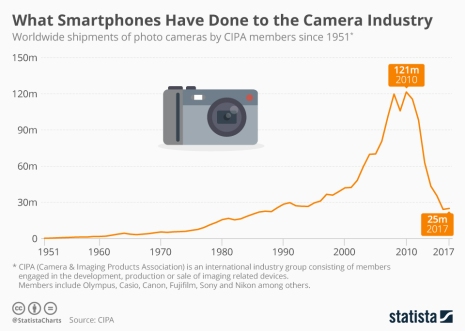 The camera industry has suffered more dramatic changes than most others. First, from basic single plate exposure photography to film, black and white to color and then finally to digital photography. Recently, I came across this chart that shows we’re not done with tearing up the industry and throwing it away – the decline in sales of cameras ever since smartphones came around. There will always be a demand for cameras because there will always be professional / expert photographers who want something more suited to their skills, but it’s safe to say that the consumer boom in cameras that digital photography started has now dissipated completely. 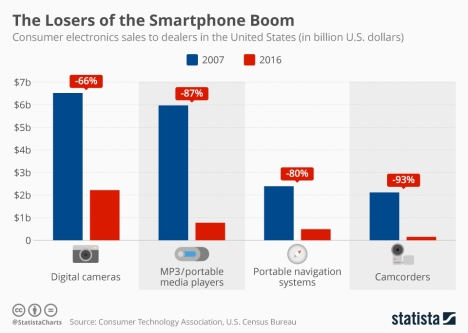 Which led me to this next chart on what else the smartphone has replaced.

The multipurpose nature of smartphones and the fact that people always have them handy are driving the integration of a lot of capabilities into one device. Some of the things we’re not measuring in the same way because they’re not hardware replacement are already happening – credit cards and cash, for instance, becoming more electronic with Google Pay, Apple Pay, Alipay and Wechat Pay, for instance.

Most of the photography companies today seem to have moved into related businesses (there have been a few mergers as well – Konica with Minolta, for instance). Also, many of them are clearly struggling as their revenues went down and haven’t managed to replace camera sales with their new lines of business quite as successfully.

Specialist GPS companies have the same story to tell. Garmin in 2018 has still not risen back to its peak revenue from 10 years ago. Apple discontinuing the iPod is a sign of what happened to the MP3 players.

What could all these companies have done differently? I’ve seen 3 broad strategies:

The first strategy hasn’t been very successful for anyone – although many of the companies survive it’s very clear that they’re still far below their peak revenues from 10-20 years ago.

Apple was the best example of the disruptor – moving quickly to integrate more functionality into the iPhone and iPad and not worry about the impact it had on other businesses.

Leica is an example of joining the disruptors – putting its lenses as OEM into Huawei phones – Karl Zeiss did the same thing with Sony phones many years ago but unfortunately they picked the wrong horse to back and Sony was never a leader in smartphones.

Canon and Konica-Minolta seem to be focusing on related diversification in their annual reports but again, their revenues haven’t grown beyond their digital camera heyday.

The reality is, when something as fundamental as the smartphone comes along, it is going to disrupt a lot of industries – simply because consumers can now make one device do the job of many.

I don’t doubt that there was a moment in the life of each of these companies when it had a chance to recognize that the future was going to be vastly different and they had to make some big changes to get ahead of it, but I think it must have been really difficult to know what to do. What management consultant would have dared to suggest to Canon that they should buy a smartphone company or sell their technology and lenses to one, way back in 2008? And what company CEO would have dared pay heed to that suggestion?

That’s the problem with disruption – it’s easy enough to see after it’s happened. When it’s still in the near future it can be hard to recognize and even harder to know how to deal with. Even if you can figure out a way to deal with it, it may not be a particularly easy or comfortable solution.

Back to the original topic – what will smartphones disrupt next? Personal computing seems like an easy guess, given how screen sizes and processing power are growing. Hearing aids, perhaps? At least for people with less serious problems, a combination of a good earpiece and software through the phone could deliver a good workable solution at a fraction of the cost of conventional (expensive) hearing aids. As phones acquire their own AR / VR hardware capabilities perhaps many aspects of modern living will be subsumed into their capabilities.

And one last thought, what’s likely to come along and wipe out smartphones in the future? It might seem a bit too soon, but if you’re working at one of the phone companies, worth thinking about starting now.