Long ago, the stock market was invented as a means for companies to raise money from the public that they could invest in growing their business.

If the companies invested that money well and the business grew, the faith of their shareholders was rewarded with dividends and rising share prices. If not, then things went the other way.

Over time, however, speculative forces changed the dynamics of the stock market and took away the link between a company’s performance and its stock price. Yes, it still forms part of what determines a price and a buy/hold/sell recommendation but there are far more factors at play and when you boil it down to its essentials, it’s really all about supply and demand and those are often driven by sentiment rather than business logic.

No better proof of this than the following 4 charts all sourced from Statista. Briefly, the first one shows that the US economy is in its worst shape in a long time. Despite this, the stock market is up over last year. Illogical? I think so. A more sector specific look at share prices and market capitalizatin in the automobile manufacturing sector shows unreal valuations for Tesla that are far in excess of its status as a relatively low volume producer of cars. It may some day outstrip its competitors in volume and therefore market value, but in order to get there it’s going to need to raise more money so the current valuation is unsustainable no matter how you look at it. 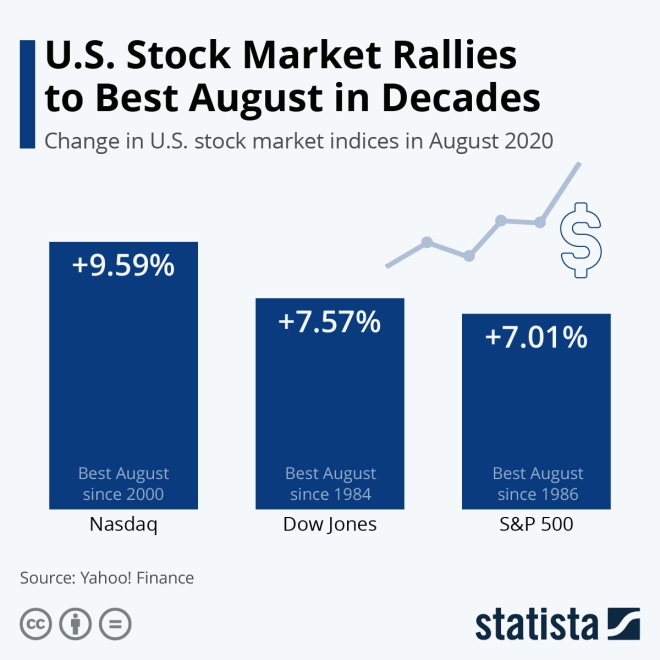 For a while, it seemed like venture capital was the replacement solution for the original purpose of the stock market. That was until big funds and VC firms started investing in companies with the specific intent of gaming the system, raising valuations at each round and eventually exiting via an IPO. This is how turkeys like Uber and Lyft which have no hopes (or even plans) of being profitable, viable companies lurched along to vastly inflated valuations and IPOs, while eventually the bell didn’t toll for WeWork and it got stuck along with the very aptly named Softbank.

What’s the future then? Perhaps it is investment funds that are not speculative in nature, not looking for the crazy 50-100X returns that everyone seems to think exist all around us. Funds that invest in companies with a sensible model that will, over time, deliver dividends and consistent growth to patient shareholders who are not in a hurry to have their shares listed on an open market. That would also mean not looking out for unicorns all the time but being willing to invest in mid-sized companies, B2B startups that are looking at a high probability of moderate success rather than a tiny probability of unbelievable success… overall, a moderation in expectations and greed is key to making this whole system work better and return to its original objective of providing a link between funds and companies that need investment to build a better future.